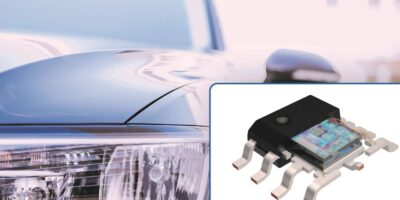 Offering angular measurement and redundancy functions for safety-critical automotive and industrial applications, the HAR 3927 is a dual-die, Hall-effect sensor offered in a small SOIC8 SMD package by TDK.

The sensor is part of the Micronas direct-angle Hall-effect sensor family, and is based on proprietary 3D HAL pixel-cell technology. It addresses the need for ISO 26262-compliant development, says the company and is equipped with both a ratiometric analogue output as well as a digital SENT interface according to SAE J2716 rev. 4.

Each HAR 3927 sensor contains two stacked dies that operate independently. The dies have minimal displacement and are penetrated by the same field lines. Unlike other sensors which have two dies side by side, the HAR 3927 operates with significantly smaller magnets, says TDK. Its magnetic field amplitude range is 20 to 130mT, and down to 5mT with reduced accuracy.

The HAR 3927 is available in a miniature eight-pin SOIC8 package. TDK says that the redundant single-package sensor reduces system costs while increasing the reliability of the system due to smaller PCBs and less solder joints.

It offers two different output formats and a linearisation block for an output signal of up to 33 setpoints (17 variable or 33 fixed setpoints). Due to the proprietary 3D HAL pixel-cell technology, customers can measure magnetic-field components, enabling linear and rotary position measurements up to 360 degrees, as well as on-and-off-axis measurements. Primary characteristics like gain and offset or reference position can be adjusted to the magnetic circuitry by programming the non-volatile memory.

Configuration options increase customers’ flexibility during development and enable one sensor to be used in multiple applications, which reduces costs and effort for re-qualification.

Samples are available now and production is planned to start in Q1 2022.