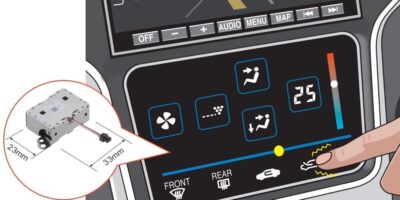 Touch feedback has been introduced to the Haptic Reactor range by Alps Alpine. The Haptic Reactor Heavy Type feedback device delivers powerful vibrations for input and warning systems in vehicles. It is sampling now, with mass production expected in January 2021.

It in response to demand for touch input in the automotive market as controls traditionally actioned by switches or dials are integrated in vehicle dashboards. Touch control is also expected to grow in car navigation and audio, as well as in air conditioning and other heating, ventilation and air conditioning (HVAC) control performed via a display. It is also integrated in advanced driver assistance system (ADAS) functionality in in-vehicle infotainment (IVI) systems.

To avoid accidents while drivers operate touch controls while driving, sound, light and other types of feedback have been added to touch controls. There is currently growing demand for vibrational feedback, which allows more intuitive control and does not require any shift of gaze, says ALPS Alpine. For example, it is incorporated in warning systems – including lane departure warnings and vehicle proximity alerts by vibrations in the steering wheel or the driver’s seat.

The Haptic Reactor range is used in gaming and virtual reality equipment. The Heavy Type produces an excitation force of 15G (at 100g), or five times that of the existing Alps Alpine product.

The Haptic Reactor Heavy Type is for installation behind the front panel of car navigation or other systems. Earlier vibration devices were restricted because they required bigger dimensions and a booster circuit to generate the power required to cause a heavy object (approximately 600g – 1kg), such as a display, to vibrate.

Using a different internal structure to Alps Alpine’s existing Hybrid Tough Type and only one resonance point, the Heavy Type achieves a 15G excitation force at a low frequency (130Hz) and has compact dimensions of 33 x 23 x 13mm while retaining the typical Haptic Reactor characteristics of horizontal resonance, which is easier to perceive with fingertips, and an outstanding response speed. A small input voltage of 7.0V eliminates the need for a booster circuit.

The Heavy Type has a mounting tab and harness connector to ease installation. The feedback unit is designed for easy incorporation behind displays as well as the vehicle cabin, such as in the steering wheel, seats and door trims. The device is supplied ready to work with a driver IC supplied by Cirrus Logic, Dongwoon Anatech or Dialog Semiconductor and can generate vibration patterns matching the particular conditions and requirements of each end product manufacturer.