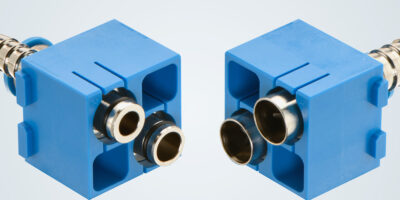 The Han Pneumatic Double Module (pictured) is a new module for compressed air transmission. The contacts of the interface have a larger connection range of 8.0 or 10mm. This enables the design of compressed air transmission with sufficient capacity to operate valve terminals. The double module is easy to assemble using a push-in technique or a conventional pneumatic connection for the hose connection, which can be inserted into the module without requiring tools. The module joins the company’s range of compressed air interfaces for internally and externally calibrated pneumatic tubing of 3.0, 4.0, 6.0, 8.0 or 10mm.

Another new product from Harting is the Han 300A module, released by Harting. It is designed for energy storage which often work with outputs of 200A / 800V DC. Future applications with higher energy density will require transmissions of 300A / 1200V DC and above. Harting says the Han 300A module is suitable for connecting new energy storage units, and, being plug-in compatible with the Han 200A module, it can also be used for upgrading existing systems to increase capacity while reducing weight, claims the company. Equipped with touch-safe contacts, it can be connected directly to the busbar or integrated into storage drawers.

Harting introduced the M12 connector format to the Han-Modular range, with either X- or D-coded versions fitting into one module to integrate, for example 10Gbit per second Ethernet into a modular interface in a compact, space-saving form factor. In comparison to conventional RJ45 interfaces, the M12 is significantly more robust, advises Harting. All common bus systems can be easily adapted, including Profibus, Profinet, CAN, Ethernet Cat. 5 and Cat. 6A.

Harting has also introduced the Han Shielded Power Module, a space-saving alternative to hard-wired shielded power cables. It has three power contacts (16A / 400V) and is suitable for connecting frequency-controlled drives, for example. An EMC-protected module is also available for signal transmission. The Han Shielded Module Basic has a large-area shield transfer and a 360 degree shield plate for large transmission volumes in compact installation spaces, says Harting. Up to 27 shielded D-Sub contacts with 4A / 32V can be plugged in to the module.

Other offerings in the Han-Modular series are the Han Megabit, for 360 degree shielded data transmission. An adapter for the module is now available which allows it to be plugged onto PCBs. The module has eight data pins and a shield contact and enables Ethernet transmission with two lines according to Cat. 5 or with one line according to Cat. 6A.