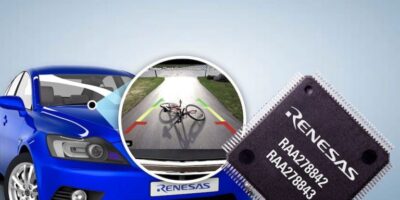 Claimed to be the first full HD 1080p LCD video controller to include a four-lane MIPI-CSI2 input, the RAA278842 LCD video controller’s four-lane (or dual two-lane) MIPI-CSI2 input supports up to 1Gbit per second per lane. This allows it to interface with the latest generation of automotive cameras, application processors and graphics processors, explains Renesas Electronics. The controller also supports a 150 MHz single-channel OpenLDI interface and a variety of video interfaces and LCD panel sizes with resolutions up to 1920 x 1080.

The RAA278842 LCD video controller has 10-bit per colour processing built into the image enhancement engine to provide near-zero latency, high quality video. Integrated video diagnostics detect if the incoming video is frozen or corrupted and can provide a direct path for the rear camera video to be displayed on the LCD. This significantly improves rear camera display reliability, explains Renesas, claiming that it virtually eliminates the possibility of a software-related problem causing the rear camera video to be displayed incorrectly or not at all. The RAA278842 can display the camera image on an LCD in less than 500 milliseconds, addressing the fast boot requirement of many OEMs. The EEPROM/SPI flash fast boot allows register programming without requiring an external microcontroller

The RAA278842 with MIPI-CSI2 output and the RAA278843 with traditional BT.656 output, work with the system’s main processor to monitor the camera and the video data coming from the SoC or graphics processor unit (GPU). After vehicle ignition, while the instrument cluster boots up, the RAA27884x controller can display the carmaker’s logo or live camera video. The controller’s on-screen display feature can also simulate warning lamp checks in an instrument cluster application.

Both controllers enable compliance with FMVSS-111, requiring the blind spot area behind the vehicle is displayed in less than two seconds after the driver places the vehicle in reverse gear.

Proprietary input switching eliminates flicker when switching between sources, claims Renesas and the AEC-Q100 Grade-2 qualified devices are specified for operation from -40 to +105 degrees C