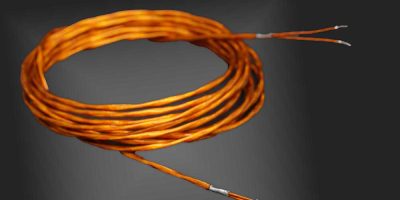 Innovative Sensor Technology claims to be the only providers of ESCC-qualified hi-rel thin-film platinum resistance temperature detectors (RTDs). Since receiving the qualification for its sensors, the company has been working on the qualification of the extended wires for use in aircraft and other hi-rel applications.

The sensor has a small form factor and is easy to assemble on PCBs, due to the extended copper wires, explained David Preiss, metrology engineer and product manager for space sensors, at Innovate Sensor Technology. The sensor with cable extensions offers engineers greater flexibility, he continued. The wires can be ordered in two- or four-wire configurations, shielded and unshielded.

The company’s temperature sensors have been used in (outer) space over 20 years. Its sensors are used as part of the European Space Agency’s (ESA’s) Rosetta space mission. In 2014, the ESA managed to successfully land their landing robot Philae on the Jupiter belt comet Churymov-Gerasimenko (67P) after a decade-long journey.

The company received its first ESCC qualification for hi-rel Pt RTDs in 2018, and they have been re-certified bi-annually ever since. With the rapidly growing demand for sensors with extension leads, IST began the ESCC certification process for the pigtails.

“We are very pleased to have reached another milestone for our space portfolio. With the qualification of the leads and welding joints, we are now able to meet a great demand for qualified hi-rel temperature sensors which now include the wire extensions,” said Omar Sacchet, area sales manager at IST. The off the shelf product saves engineers valuable time and money as they do not have to undergo rounds of testing to meet the high demands and numerous standards of (aero-) space regulations.

The HiRel Pt temperature sensors are available with a resistance of 100 to 2,000 Ohm, within temperature ranges of -50 to +150 degrees C or -200 to +200 degrees C, with platinum leads only, or with twisted two- or four-core extension cables up to 10,000 mm, with or without shield and jacket.

All sensors are available both as flight models (FM) and engineering models (EM). The general ESCC specification No. 4006/015 applies. Details about the different sensor variants can be found in the ESCC Qualified Parts List (QPL).