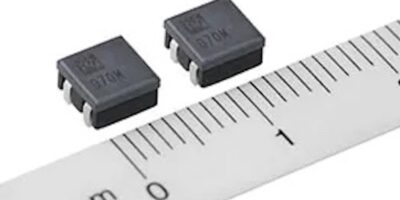 The HPL505032F1060MRD3P, HPL505032F1070MRD3P and HPL505032F1080MRD3P inductors achieve high power efficiency by adopting a low resistance frame for the highly permeable and low-loss ferrite made of high BS material and low DC resistance (RDC) that is developed in-house. Its rated current is 40 to 50A, which is up to 1.5 times higher than TDK’s existing HPL505028 inductor. According to TDK, the proprietary structural design generates magnetic flux cancelling effects contributing to noise control. The frame integrates internal and external electrodes which reduces the risk of an open circuit and short circuit, ensuring high reliability, says TDK.

As more vehicles are incorporating ADAS, and the industry moves to autonomous vehicles, there is increased demand for high speed, large capacity camera footage.

The inductors operate between -55 to +155 degrees C, including self-heating applications.

The inductors are in mass production now.

TDK was established in 1935 to commercialise ferrite, a key material in electronic and magnetic products. TDK’s portfolio features passive components such as ceramic, aluminium electrolytic and film capacitors, as well as magnetics, high-frequency, and piezo and protection devices. The company also supplies sensors and sensor systems such as temperature and pressure, magnetic, and MEMS sensors, together with power supplies and energy devices.

The products are marketed under the brands TDK, Epcos, InvenSense, Micronas, Tronics and TDK-Lambda. TDK focuses on demanding markets in automotive, industrial and consumer electronics, and information and communication technology. The company has a network of design and manufacturing locations and sales offices in Asia, Europe, and in North and South America.