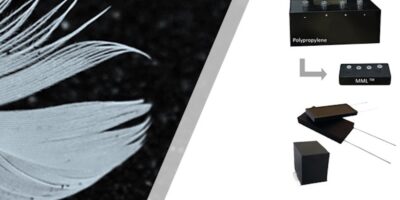 MML is claimed to provide the highest capacitance per volume in film capacitors available today. The energy density of 400 J/dm3 allows for a reduction in size and weight compared to traditional polypropylene or polyester dielectrics. There is also an increase in operating temperature range, up to 140 degrees C and transient voltage protection.

They also allow low profile configurations. The company reports studies conducted on controls and DC-Links functions for aircraft applications, all showing about 50 per cent reduction in size and weight compared to other film technologies.

The capacitors are also claimed to demonstrate between 70 to 90 per cent reduction in weight, compared to multi-layer ceramic capacitors (MLCCs). They also show no capacitance derating with voltage applied and a low drift of less than five per cent through the temperature range, says Exxelia. Applications using clusters of stacked MLCCs can now be replaced by a single MML unit of similar size, with the increased reliability of using film dielectric, says the company.

Exxelia Group was created in 2009 from the merger of several long-established companies. The Group provides a product portfolio dedicated to harsh environments. Its products are commonly used for power electronics, power generation, energy storage, and signal filtering functions in demanding domains such as defence, aviation, space, energy, transportation, medical, telecomms and other industrial applications.