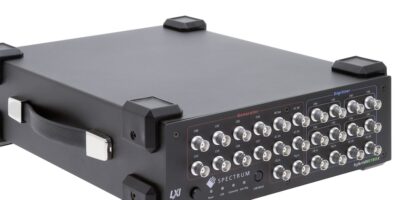 Eight high speed hybrid instruments from Spectrum Instrumentation expand the hybridNETBOX offering to a total of 14. Described as a generator and digitiser in one box, the eight hybridNETBOX models generate and acquire faster signals, says the company.

The instrumentation platform combines a multi-channel arbitrary waveform generator (AWG) and a digitiser in a single portable unit. They are capable of simultaneous signal generation and acquisition, for applications involving stimulus-response or closed-loop testing.

Electronic signals can be created and acquired simultaneously, suitable for automated testing. For example, they can reproduce and capture echo signals in radar, lidar or ultrasound. The hybridNETBOX is also suited to ATE applications where components and sub-assemblies need to be tested quickly in an automated process. They can quickly ascertain the functionality and tolerance of devices under test or units under test (DUTs or UUTs) by exercising them with numerous, easily adjusted, complex signals. This testing process can be deployed in bus testing, MIMO communications, circuit verification, robotics, automotive and scientific experiments.

Each hybridNETBOX includes Spectrum’s SBench 6 control software, for signal generation, acquisition, display, signal processing, storage and reporting. SBench 6 allows waveforms to be created using standard functions and mathematical equations. Data can be acquired with the digitiser part and then be transferred to the AWG for replay. Data sharing with other programs or devices, such as oscilloscopes, is possible using built-in, import/export functions for transferring data in Binary, ASCII or Wave formats.

The hybridNETBOX comes with drivers for Windows and Linux operating systems, as well as programming examples for C++, LabVIEW, MATLAB, Visual Basic .NET, JAVA, Python and other popular languages.