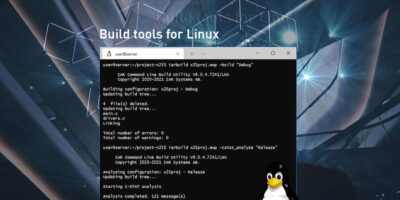 The latest addition to the build tools for Linux are based on the build tools in the development toolchain IAR Embedded Workbench. The extended tools now support deployment in Linux-based frameworks for Renesas’ low-power RL78 microcontrollers, enabling organisations to streamline building and testing workflows, says IAR Systems.

IAR Build Tools for Linux were created to optimise resources to meet today’s embedded applications which are future rich and increasingly complex. The tools can be easily integrated into different build systems, such as CMake and Ninja, and the command line build utility IARBuild streamlines building for easy integration with continuous integration engines like Jenkins and Bamboo, or with docker containers. The integrated static analysis tool C-STAT allows developers to ensure code quality throughout the development and testing process. C-STAT proves code alignment with industry standards like MISRA C:2012, MISRA C++:2008 and MISRA C:2004, and also detects defects, bugs, and security vulnerabilities as defined by CERT C and the Common Weakness Enumeration (CWE).

According to IAR, adding support for Renesas RL78 microcontrollers for the build tools shows its commitment to investment in technology to support customers throughout their development workflows.

IAR Systems supplies future-proof software tools and services for embedded development. The company is headquartered in Uppsala, Sweden and has sales and support offices all over the world. Since 2018, Secure Thingz, the global domain expert in device security, embedded systems, and lifecycle management has been part of IAR Systems.