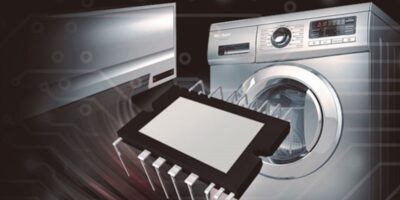 The BM6437x series of IPMs are for compact industrial equipment, such as small capacity motors for robots, as well as home appliances, including air conditioners and washing machines.

The IPMs use low-loss IGBTs to reduce power consumption compared with Rohm’s conventional IPMs by six per cent (fc=15kHz), which reduces loss and contributes to the reduction power consumption in equipment. The integral temperature monitoring function has been improved, resulting in high ± two per cent accuracy (equivalent to two degrees C), says Rohm. As a result, the external thermistor conventionally required with existing high accuracy temperature monitors can be eliminated. There is also an error identification mode to identify the cause of the failure (i.e. short current protection, under voltage protection or thermal shutdown protection).

Rohm Semiconductor develops and manufactures a large product range from SiC diodes and MOSFETs, analogue ICs such as gate drivers and power management ICs to power transistors and diodes to passive components.

The company has manufacturing plants in Japan, Korea, Malaysia, Thailand, the Philippines, and China.