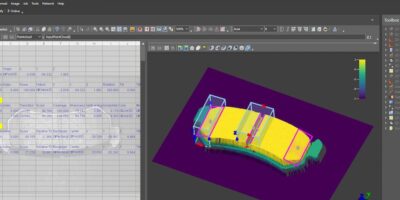 “The basis of the new technology is a blue laser with a wavelength of 450 nm,” said Thomas Ruhnau, director of engineering at Cognex, who has been involved in the development of the integrated laser from the beginning. “The laser beam is then deflected by a microelectromechanical mirror with ultrasonic vibrations in a plane to create a fanned beam. This is directed onto a diffuser optic that has a unique property. This optical element creates a perfect laser fan with a precisely defined width and an intensity distribution that is absolutely uniform along the line, eliminating the formation of speckle in the approach.”

The system is robust enough for use in harsh industrial environments and still operates within the safety limits for protection class 2M lasers. Because the laser line is projected full-width rather than drawn from a single point of light, the line brightness remains high while the amount of light decreases. If the amount of light was sustained, it could pose a potential safety risk to people around the laser. “Due to the very fast movement of the laser over the diffuser optics, there is no standing point source that could be imaged in the eye of someone around the laser and cause harm,” Ruhnau clarifies. “This increases safety for operators and there are fewer requirements for safety equipment.”

Cognex has also placed great emphasis on intuitive operation in the development of the associated programming environment. The functional scope of the embedded tools includes all those necessary for 3D image processing, such as flexible options for plane and height determination, as well as proven tools such as PatMax3D, Blob3D, 3D Geometry and many other options. This suits In-Sight 3D-L4000 to deploying powerful applications in automotive production, packaging and electronics.

For more information go to http://www.cognex.com