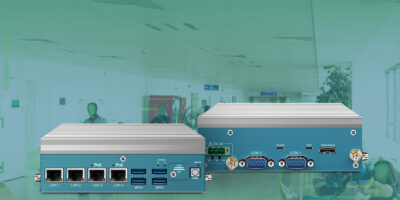 The NVIDIA Jetson Xavier NX System on Module (SOM) is a 15W processing unit that is built around a 384 Core NVIDIA Volta GPU, with 48 Tensor cores and a Hexa-core NVIDIA Carmel ARM V8.2 64-bit CPU with 6MB of L2 cache.

Capable of offering 21 TOPs of GPU accelerated performance, the Xavier NX can decode up to four 4K30 HEVC video streams while running modern neural networks in parallel. The EAC-2000 series is ready to be deployed out of the box as the Jetson Xavier NX also ships complete with 8GB of LPDDR4x of system memory and 16GB of eMMC storage.

NVIDIA’s Jetpack software suite means the EAC-2100 can be deployed with any application that was developed on a Jetson development kit.

The EAC-2000 is targeted at Edge AI demands and is powered by the NVIDIA Jetson Xavier NX. Packed with I/O, the EAC-2000 comes with one HDMI display port, two Gigabit PoE+ ports with 25W per port, dual Gigabit Ethernet, four USB3.1 and two serial ports.

For wireless connectivity, there is an M.2 E-key for wi-fi and Bluetooth, and an M.2 3042/3052 B-key slot that can support up to 5G cellular comms along with SIM card support and six antenna breakouts. For storage, in addition to the onboard 16GB eMMC included, there is an M.2 2280 M-key, plus an external SD card slot offering a variety of options.

The EAC-2100 expands on the feature set provided by the EAC-2000 and focuses more on in-vehicle usage, with the addition of CANbus support, four Fakra-Z connections for GMSL automotive cameras, and two Gigabit PoE+ ports.

Both models come in a compact wall-mountable metal chassis with EN 50155 and EN 50121-3-2 certification for EMC, a wide -20 degrees C to +70 degrees C operating temperature and 9V to 50V DC power input to meet the demands of a range of industrial automation and Edge applications, as well as support for the rail and in-vehicle market.

For more information go to http://www.impulse-embedded.co.uk