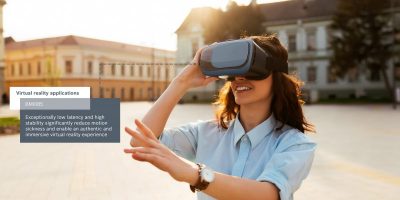 The low latency of the BMI085 enables headset manufacturers to eliminate image drifts and deliver a true real-life experience, says the company. The IMU delivers a low motion-to-photon latency of less than three milliseconds and achieves near perfect stability in environments with high temperature fluctuations as often encountered in continuous head-mounted displays (HMDs) or AR headsets. This further improves accuracy, which is critical in today’s lightning fast high-definition AR/VR applications, says Bosch Sensortec.

The BMI085’s gyroscope features a closed-loop ADC mechanism, which ensures low drift characteristics even in high-fluctuation temperature environments. The accelerometer achieves a noise density of under 120-micro g/√Hz. The IMU’s accuracy is further boosted by data synchronisation of the accelerometer and gyroscope.

The BMI085 is pin-to-pin compatible with Bosch’s BMI055 IMU, for ease of design migration. The BMI085 will be available via distributors at the end of May 2018.