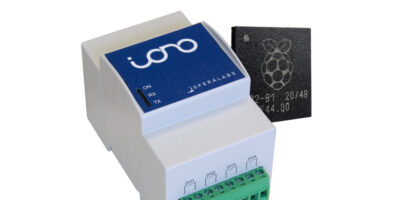 Following hot on the heels of the release of the Raspberry Pi RP2040 microcontroller, Sfera Labs has introduced the first industrial product based on this new chip.

The Iono RP is a compact programmable I/O module that combines the ease of use of the Raspberry Pi with a choice of digital and analogue input and output interfaces. The result, says Sfera, is a rugged, safe, reliable, and easy-to-connect module, fully CE, FCC, and IC compliant and suited to installation in industrial and residential environments.

The new module incorporates the RP2040, the first high-performance microcontroller chip designed by Raspberry Pi and aimed at industrial and hobbyist markets. It features a dual-core Arm Cortex-M0+ processor, clocked at up to 133MHz, plus 264kB internal RAM and a flexible input/output internal architecture with several standard interfaces.

There are optional features available for the Iono RP. These include a real-time clock with battery back-up and a secure element chip for encryption and safe storage of digital certificates. An earthquake sensor can also be factory installed as an option, which may be used, for example, to disconnect electrical loads or perform other safety-related automation tasks when an earthquake is detected.

For more information go to https://www.sferalabs.cc/product/iono-rp