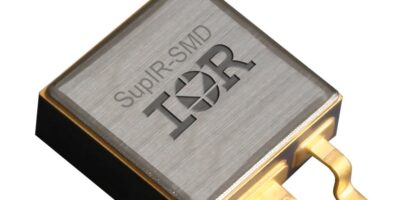 Capable of attaching directly to the PCB, the SupIR-SMD design is proven to meet the most stringent reliability testing in this configuration, says Infineon. Compared to the typical packaging used in space applications, the SupIR-SMD delivers a 37 per cent smaller footprint, 34 per cent lighter mass and 33 per cent higher current density, while offering a more direct thermal path for heat transfer.

Traditionally, designers resort to a ‘dead bug’ and lead configuration, where the packages are flipped upside down and soldered to the PCB via leads. ‘Dead bug’ soldering dissipates heat sub-optimally and decreases MOSFET power capacity. Using the direct mount of the SupIR-SMD package, attaching the MOSFET to the PCB, system designers can optimise power system efficiency by enabling the shortest thermal conduction path without compromising system reliability, claims Infineon.

The SupIR-SMD package is JANS-qualified to MIL-PRF-19500. JANS is the most rigorous level of screening and acceptance requirements available to assure the performance, quality and reliability of discrete semiconductors intended for space flight. The rad-hard MOSFETs are also QPL-qualified for space applications.

The SupIR-SMD rad-hard MOSFETs can be ordered now.