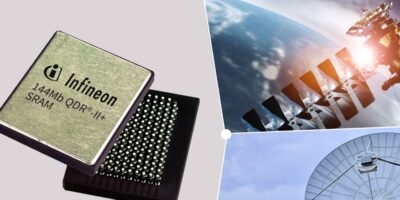 According to Infineon, the QDR-II+ SRAM reduces the overall system complexity in radar and imaging applications by delivering higher performance than using DRAM which has higher latency and memory bank restrictions.

Earlier generations of the rad-hard QDR-II+ SRAMs, developed by Cypress Semiconductor which was acquired by Infineon in 2019, have been adopted in NASA’s Surface Water and Ocean Topography (SWOT) research satellite mission using synthetic aperture radar technology.

The 144-Mbit QDR-II+ SRAM operates up to a maximum frequency of 250MHz, delivering up to 36Gbits per second throughput in a 165-ball ceramic column grid array (CCGA) package. The device is rad-hard for up to 200krad(Si) and is latch-up immune.

The 144-Mb QDR-II+ SRAM is available now in x18 or x36 bus-width configurations and with on-die-termination in a two or four word burst mode for design flexibility.