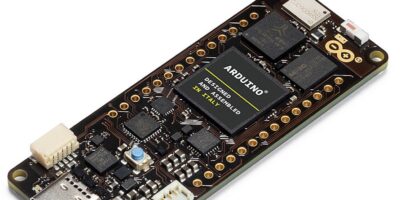 Distributor, Farnell, has added the Portenta H7 module by Arduino to its range of single board computers (SBCs). This is first member of the family and includes everything needed to get started with IoT hardware development, says Farnell. This includes crypto-authentication chip and communications modules for Wi-Fi, Bluetooth Low Energy (BLE) and LTE, as well as Narrowband IoT (NB-IoT).

Portenta H7 features an STM32H747XI, dual core, ARM Cortex-M7 and Cortex-M4 running at 480 and 240MHz, respectively. Both are capable of running high level code such as protocol stacks, machine learning or even interpreted languages such as MicroPython or JavaScript along with low-level real time tasks, Farnell explains. Its form factor ensures that any existing MKR industrial shield can be used and that it can run Arduino code, Python and Javascript. The module operates at an industrial temperature range of -40 to +85 degrees C.

The on-board wireless module enables simultaneous Wi-Fi and Bluetooth connectivity. The WiFi interface can be operated as an access point, a station or as a dual mode simultaneous AP/STA and can handle up to 65Mbits per second transfer rate.