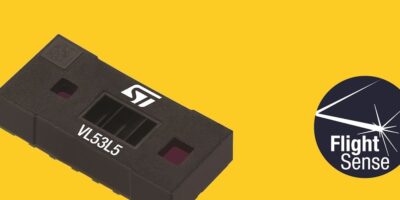 Offering an increased camera field of view (FoV) coverage and spatial resolution, the VL53L5 FlightSense time of flight (ToF) sensors are believed to be the first 64-zone devices. The sensors from STMicroelectronics breaks a scene into separate areas to help an imaging system build the most detailed spatial understanding of a scene, the company says.

The miniature module contains optical elements in the receive aperture to create the 64 ranging zones. Range is 4m.

ST’s ToF technology includes human-presence detection to control the wake up and hibernation of laptops or monitors and laser autofocus in hybrid focusing algorithms for smartphone cameras. The auto focus feature is embedded in most of the highest-ranking smartphone cameras according to DXOMARK, an independent benchmark that assesses image quality.

ST says that key smartphone and PC platform suppliers have pre-integrated the sensor onto platforms. Android and Windows device drivers are widely available for the FlightSense modules.

The VL53L5 is packaged in a 6.4 x 3.0 x 1.5mm module and integrates both transmit and receive lenses and has and expanded FoV of 61 degrees diagonal. This wide FoV is especially suited to detect off-centre objects and ensure perfect auto focus in the corners of the image.

For laser auto focus, the VL53L5 gathers ranging data from up to 64 zones across the full FoV.

ST’s architecture can automatically calibrate each ranging zone and direct ToF technology allows each zone to detect multiple targets and reject reflection from the cover-glass. FlightSense also gathers the raw data collected by the SPAD array and performs post processing, via a proprietary, embedded MCU and accelerator before transferring the ranging data to the system host over an I2C or a SPI bus. This removes the need for a specific camera interface and powerful receiver MCU.

The VL53L5 retains the Class 1 certification of all ST’s FlightSense sensors and is fully eye-safe for consumer products. It is in mass production with millions of units already shipped to leading wireless and computer manufacturers, says ST.