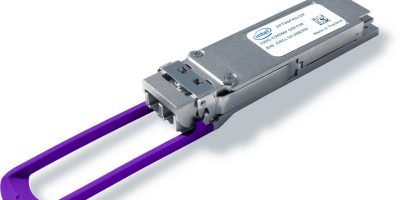 At this week’s European Conference on Optical Communication (ECOC) in Rome, Italy, Intel announces the expansion of its 100G silicon photonics transceivers beyond the data centre and into the network edge.

The 100G silicon photonics transceivers are optimised to accelerate the movement of massive amounts of data being generated by new 5G use cases and internet of things (IoT) applications, explains Intel. The silicon photonics transceivers are optimised to meet the bandwidth requirements of next-generation communications infrastructure while withstanding harsh environmental conditions.

Hyperscale cloud customers are currently using the 100G silicon photonics transceivers to deliver high-performance data centre infrastructure at scale. “By extending this technology outside the data centre and into 5G infrastructure at the edge of the network, we can provide the same benefits to communications service providers while supporting 5G fronthaul bandwidth needs,” said Dr. Hong Hou, vice president and general manager of Intel’s Silicon Photonics Product Division.

The ability to move, store and process data is increasingly vital, says Intel and the 100G silicon photonics offer fast, reliable and cost-effective connectivity. The industry’s move to 5G, and an increase in existing network traffic such as video streaming, are placing challenges on existing communications infrastructure that must support an expanded spectrum range including mmWaves, massive MIMO and network densification. These 100G silicon photonics transceivers meet the bandwidth demands of 5G wireless front haul applications and are designed to meet the harsh outdoor conditions of cellular towers with the capability to support optical transport to the nearest baseband unit or central office (up to 10km).