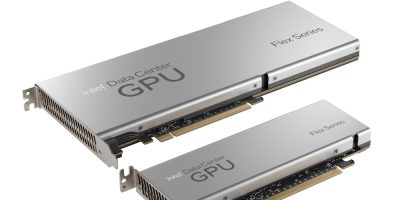 The data centre (GPU) graphics processing codenamed Arctic Sound-M has been unveiled as the Flex series. The Flex series GPUs are designed to meet the requirements for intelligent visual cloud workloads, said Intel. The Flex 170 is designed for maximum peak performance while the Flex 140 is for maximum density.

The Flex series GPU are capable of processing up to 68 simultaneous cloud gaming streams and handle workloads without having to use separate, discrete solutions or rely on siloes or proprietary environments, said the company. This helps lower and optimise the total cost of ownership for diverse cloud workloads like media delivery, cloud gaming, AI, metaverse and other emerging visual cloud use cases.

The Flex series GPUs have what is claimed to be the first hardware-based AV1 encoder in a data centre GPU to provide five times the media transcode throughput performance and two times the decode throughput performance at half the power of the Nvidia A10 in the case of the Intel Flex series 140 GPU, for example. According to Intel, the series also delivers more than 30 per cent bandwidth improvement to save on the total cost of ownership and has broad support for popular media tools, APIs, frameworks and the latest codecs, including HEVC, AVC and VP9.

The GPUs are powered by Intel’s Xe-HPG architecture and can provide scaling of AI inference workloads from media analytics to smart cities to medical imaging between CPUs and GPUs without “locking developers into proprietary software”.

The Flex series GPU software stack includes support for oneAPI and OpenVINO. Developers can use Intel’s oneAPI tools to deliver accelerated applications and services, including the Intel oneAPI Video Processing Library (oneVPL) and Intel VTune Profiler, for example. The open alternative to proprietary language lock-in enables the performance of the hardware and has a set of tools that complement existing languages and parallel models. This allows users to develop open, portable code that will take maximum advantage of various combinations across Intel CPUs and GPUs. It also means developers are not tied to proprietary programming models, which can be financially or technically restrictive, said Intel.

When scaled to 10 cards in a 4U server configuration, it can support up to 360 streams HEVC-HEVC 1080p60 transcode throughput.