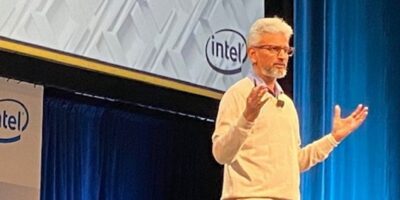 The Ponte Vecchio general purpose GPU is based on the Xe architecture.

Ponte Vecchio is architected for HPC modeling and simulation workloads and AI training. It will be manufactured on Intel’s 7nm technology and will be Intel’s first Xe-based GPU optimised for HPC and AI workloads. Ponte Vecchio will leverage Intel’s Foveros 3D and EMIB packaging and feature high-bandwidth memory, Compute Express Link interconnect and other IP in one package.

Intel also launched the oneAPI initiative to define programming for an AI-infused, multi-architecture world. oneAPI delivers a unified and open programming experience to developers on the architecture of their choice without compromising performance and eliminating the complexity of separate code bases, multiple-programming languages, and different tools and workflows. It preserves existing software investments with support for existing languages while delivering flexibility for developers to create versatile applications.

Developers can download the oneAPI tools, test drive them in the Intel oneAPI DevCloud.