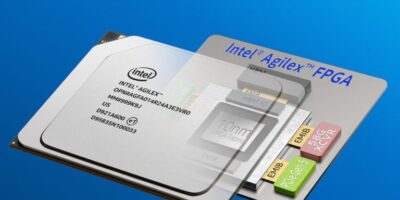 Shipments have commenced for the Intel Agilex field programmable gate arrays (FPGAs). The devices are being used by early access program customers to develop advanced solutions for networking, 5G and accelerated data analytics.

The Agilex FPGAs are expected to provide the agility and flexibility that is demanded by data-centric, 5G-fuelled operations where networking throughput must increase and latency must decrease. Intel Agilex FPGAs deliver “significant gains in performance and inherent low latency,” says the company. They are reconfigurable and have reduced power consumption, together with computation and high-speed interfacing capabilities that enable smarter, higher bandwidth networks to be created. They also contribute to delivering real-time actionable insights via accelerated artificial intelligence (AI) and other analytics performed at the edge, in the cloud and throughout the network.

According to Doug Burger, technical fellow, Azure Hardware Systems at Microsoft, the software company has been working closely with Intel on the development of the Agilex FPGAs and is planning to use them in accelerating real-time AI, networking and other applications/infrastructure across Azure Cloud Services, Bing and other data centre services.

The Intel Agilex family combines second-generation HyperFlex FPGA fabric built on Intel’s 10nm process, which is up to 40 per cent higher performance or up to 40 per cent lower total power compared with Intel Stratix 10 FPGAs. There is also the heterogeneous 3D silicon-in-package (SiP) technology based on Intel’s proven embedded multi-die interconnect bridge (EMIB) technology. As a result, Intel can integrate analogue, memory, custom computing, custom I/O and Intel eASIC device tiles into a single package along with the FPGA fabric.

Intel also says they are the only FPGAs that support hardened BFLOAT16, with up to 40TFLOPS of digital signal processor (DSP) performance. They also have the ability to scale for higher bandwidth compared with PCIe Gen 4, due to the use of PCIe Gen 5.

Transceiver data rates support up to 112Gbits per second for high-speed networking requirements for 400GE and beyond. There is also support for memory option, such as current DDR4, upcoming DDR5, HBM, and Intel Optane DC persistent memory.