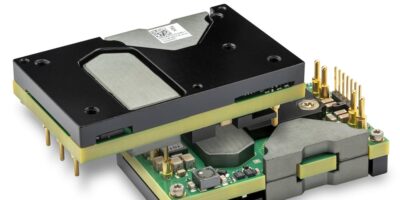 The converters include the company’s proprietary hybrid regulated ratio (HRR) technology, developed to extend power capabilities with the efficiency and resilience to voltage transients that would usually be expected from a fixed-ratio converter, says Flex.

The second introduction is the BMR4910203/851. It operates over a wider input voltage of 40 to 60V and also delivers up to 1300W of continuous power with 12V over the whole input range. It is a fully regulated version which also allows up to five modules to be paralleled, enabling up to 500A or 6.5kW. Efficiency is 97.4 per cent at 48Vin and half load.

There is also over-voltage, over-temperature and short-circuit protection, to prolong operational lifespan with a mean time between failures (MTBF) of 7.7 million hours.

A baseplate facilitates heat dissipation and there is a 1500V galvanic isolation between the input and output to contribute to safety levels.

Both modules comply with IEC/EN/UL 62368-1 safety standards. The devices offer an operational temperature range of -40 to +125 degrees C.

The BMR491 will be available in OEM quantities before the end of the year (specifications are subject to modification in the interim period, advises Flex).