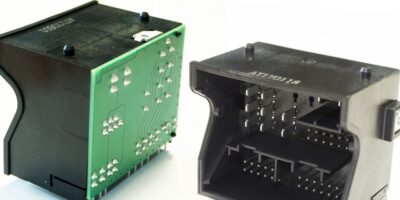 The Y-Quad junction box connector is used in automotive infotainment systems for the internal wiring and control of loudspeakers which typically use a common interface. Yamaichi has improved the design of this I/O connector, and also introduced a reflow-compatible pin-in-paste version in addition to the standard version for the wave soldering assembly method.

The Volkswagen standard interface (Quadlock) technical specification defines a PCB connector with up to 52 contacts which perform various tasks in mixed configuration from Ethernet signals to power pins.

The ground connection is possible in various positions with the Yamaichi connector, offering the opportunity to design the housing more flexibly.

The optional high power version can transmit up to 20A, using a special PCB design, rather than the standard version which has a maximum current of 16A transmitted via the power pins. In general, the number of pins can be adjusted individually.

The company offers a 90 degree angled version, with a large number of contacts requiring a PCB on the back, which routes the electrical signals or currents. The connector is soldered to the customer’s circuit board. A ground contact is connected to the shielding of the customer housing.

The 180 degree straight version can do without the PCB and the ground, because all contacts can be soldered directly to the customer’s circuit board. Both versions are soldered using through hole wave soldering.

In addition to the standard version for the wave soldering assembly method, Yamaichi also offers a reflow-compatible pin-in-paste version. For the customer, this offers the advantage that there is no longer a need to process the junction box in a separate, additional soldering process. Now, the customer can process the Y-Quad simultaneously in the standard reflow process. This results in savings in time and money, says Yamaichi.

The production takes place in a fully automatic assembly line. The packaging is in tray or tube, depending on the customer’s requirements.