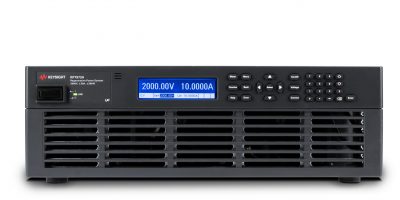 Engineers can maximise solar power conversion using the PV8900 photovoltaic array simulator, says Keysight. It believes it is the first company to launch PV array simulators that deliver 2,000V and 20kW in a 3U format.

To keep solar power at grid parity with competing methods of power generation, performance and power conversion efficiency are critical, explains Keysight. Small increments in power production can impact profitability of solar power generation. Engineers need to ensure that their solar inverters can convert maximum power from the connected solar array. Developing and verifying the performance of inverter maximum power point tracking (MPPT) algorithms and circuits is complex, while testing is difficult, expensive and time consuming.

Multiple MPPT inverters are used to make large commercial arrays flexible, but MPPT channels have to be tested one channel at a time. The Keysight PV8900 Series, along with the DG9000A advanced photovoltaic inverter test software, tests up to 12 MPPT channels simultaneously.

According to Keysight, the PV8900 series of PV array simulators offers the highest power density with 20 kW in a 3U high form factor that can be paralleled to 200 kW to test string inverters at full power capacity while reducing rack space.

They also offer up to 2,000V, 30A output to test the next generation of string inverters which future- proofs array simulator investment.