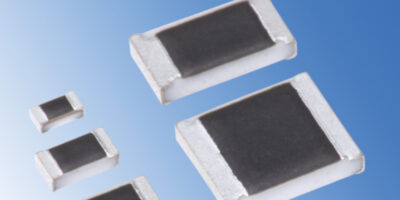 The RN73R series of high precision chip resistors are optimised for industrial and automotive applications, and for use in test instrumentation and audio equipment. The thin film element of the resistors exhibits a temperature co-efficient of resistance that ranges from ±5ppm to ±100ppm.

They are also claimed to have a greater electrolytic corrosion resistance than its predecessor – the RN73 series, offering more reliability, particularly in demanding environments. Resistance values range from 10R to 1.5M dependent on the chip size. Resistance tolerance levels are available down to ±0.05 per cent.

There are five sizes of RN73R chip resistors available, ranging from 0402 to 1210, with power ratings of up to 0.25W. They are compliant with the AEC-Q200 automotive standard and operate over a wide temperature range of -55 to +155. They also have a maximum moisture tolerance of ±0.25 per cent, at 85 per cent relative humidity for a period of 1000 hours at +85 degrees C.

RS Components is a global omni-channel solutions partner for industrial customers and suppliers who are involved in designing, building or maintaining industrial equipment and facilities. The distributor aims to offer customers an unrivalled choice of product technologies, and help them solve problems with innovative solutions.

The distributor stocks more than 500,000 industrial and electronic products, sourced from over 2,500 leading suppliers. It has operations in 32 countries, and trades through multiple channels and ships over 50,000 parcels a day.