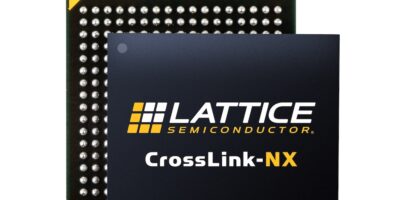 The Lattice Crosslink-NX family from Lattice Semiconductor has been expanded with FPGAs specified for automotive applications such as advanced driver assistance systems (ADAS) and in-vehicle infotainment (IVI) systems.

The CrossLink-NX low power FPGAs are characterised by a small form factor, high-performance I/O, and reliability, says Lattice. They are also claimed to be the only FPGAs in their class to support embedded MIPI D-PHY interfaces with speeds up to 10Gbits per second.

Many radar, lidar and camera sensors are based on the [Mobile Industry Processor Interface] MIPI. These technologies are being increasingly adopted by the automotive market to enhance vehicle functionality. The ADAS sensor market alone predicted to grow to $40.8 billion in 2030, at an 11.7 per cent CAGR between 2020 and 2030, says Lattice.

The CrossLink-NX FPGAs for automotive applications carry AEC-Q100 qualification up to Grade 2 (TA = 105 degrees C) and a soft error rate (SER) up to 100 times lower than similar competing FPGAs, says Lattice. According to the company, this  makes the CrossLink-NX FPGAs particularly suitable for mission-critical applications that must operate safely and reliably in challenging environments.

The CrossLink-NX FPGAs are built on the Lattice Nexus FPGA platform, which leverages an FD-SOI manufacturing process and FPGA architecture to boost power efficiency. The CrossLink-NX FPGAs deliver up to 75 per cent lower power consumption in comparison to similar competing FPGAs, reports Lattice. This low power consumption provides extra thermal headroom for ADAS and IVI applications running at higher temperatures.

The small form factor CrossLink-NX FPGAs are up to 10 times smaller than similar competing FPGAs, which is a benefit for space-constrained automotive systems.

The FPGAs can meet the performance and data bandwidth requirements of increasingly complex ADAS systems, where they can be used to perform signal splitting, duplication, and aggregation of image sensor outputs. They can also be used to offload edge AI processing from the main ADAS processor, explains K Ganesh Rao, practice head – FPGA solutions at technology consultancy, Tata Elxsi. “Lattice CrossLink-NX FPGAs are a compelling hardware option for these applications, and we applaud Lattice’s decision to release automotive-grade versions of this flexible embedded vision platform,” he says.