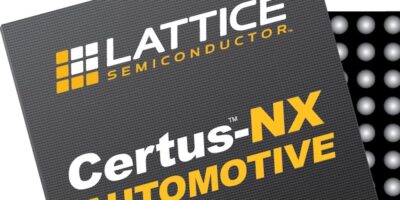 Among the advantages claimed for the latest Certus-NX FPGAs, Lattice Semiconductor lists a smaller form factor and faster configuration to simplify safety-critical design.

The latest additions to the Lattice Certus-NX FPGA family are optimised for safety-focused applications. They can be used in motor control, LED control in in-vehicle infotainment (IVI) systems, in-vehicle networking (IVN), and sensor data co-processing in ADAS applications.

Power consumption is up to four times lower than similar FPGAs, with a programmable back bias that enables user-selectable high performance or low power operating modes, depending on the needs of the application.

The small form factor – up to three times smaller than competing FPGAs and has up to two times the I/O density per mm2 in comparison to similar, competing FPGAs, Lattice reported.

They have instant-on performance, with fast device configuration from SPI memory which is up to 12X faster than similar competing FPGAs. Individual I/Os are able to configure in just three milliseconds, and full-device start-up in eight to 14 milliseconds, depending on device capacity.

To protect bitstreams, they support AES-256 encryption with ECDSA and are believed to be the smallest FPGAs on the market to support ECDSA to date.