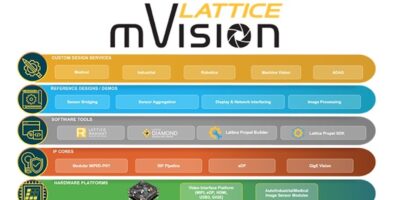 The mVision v2.1 has support for the LPDDR4 DRAM memory standard. With up to eight programmable SerDes lanes capable of speeds up to 10.3 Gbits per second, the Nexus FPGAs are claimed to deliver the highest system bandwidth in their class, enabling popular communication and display interfaces such as 10 Gigabit Ethernet, PCI Express, SLVS-EC, CoaXPress, and HBR3 DisplayPort (at up to 8.1 Gbits per second per lane).

Industry analyst Bob O’Donnell with TECHnalysis Research explains: “LPDDR4 memory provides device designers with a great range of different capacities / densities, speeds, and power requirements that can be matched to specific applications. Because of its low power nature, LPDDR4 memory is particularly well-suited for embedded and machine vision in battery-powered devices or other applications where thermal management is a challenge.”

While embedded and machine vision applications can realise new user experiences in industrial, automotive and consumer markets, supporting them at the edge requires a balance of processing performance and the design’s power consumption and physical constraints, adds Mark Hoopes, director of industrial and automotive segment marketing at Lattice Semiconductor. The mVision stack simplifies and accelerates embedded vision solution development and this version 2.1 leverages the company’s Nexus FPGAs to support high performance interfaces and faster processing at low power, he says.