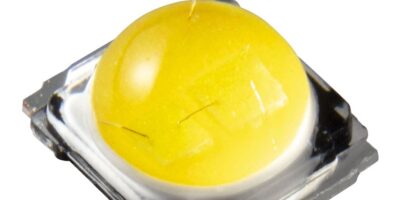 A new dual function LED that provides both white light and high doses of energy aimed at getting rid of various bacteria has been launched by Nichia.

The NF2W585AR-P8 LED, measuring 4.0mm x 3.6mm, uses a combination of phosphor and die technology and offers a peak pump emission wavelength of around 405nm.

UV-C and UV-B wavelengths, ranging from about 200nm to 380nm, have typically been used disinfectants. But it has also been proven that visible light, ranging from approximately 380nm to 420nm, also works as a disinfectant against bacteria.

With Covid-19 continuing to have an impact worldwide, there has become an increased awareness and need for sanitisation. While this applies to viruses, it also applies to various types of bacteria present in everyday environments.

Examples of typical bacteria that cause infections include Staphylococcus aureus and Escherichia coli (e-coli, O157) the latter of which causes food poisoning.

Pseudomonas aeruginosa is typically seen in wet areas and is highly resistant to drugs. If the human immune system is suppressed, there is a chance that this bacteria could cause such conditions as respiratory tract infection or sepsis.

Nichia is a leader in LED manufacturing. Founded in 1956 as a specialist chemical producer, it quickly became the leader in luminescent materials (phosphors). Nichia later developed and launched the first high brightness blue LED in 1993 and the first white LED in 1996.