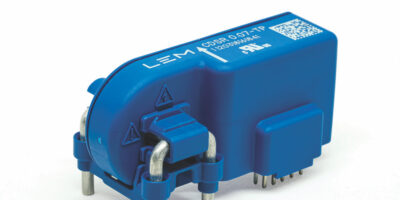 Open loop Fluxgate technology is the basis for the CDSR leakage current sensor, announced by LEM. The CDSR is compact and safe, allowing manufacturers to optimise the electronic design of charger products, says the company.

Due to this high expected demand, manufacturers of electric chargers must develop solutions that are competitive, affordable and capable of being industrialised at high volume. As well as being easy to install for the end user, they must meet many standard criteria, for safety and robustness, says LEM.

The CDSR has been developed to meet market demand for a residential and commercial charging station, offering a version for single-phase architecture and another for three-phase topology. With a maximum current per phase of 32A rms, the CDSR can be integrated into AC chargers from 3.7 kW to 22kW.

Since 2016, IEC standards, in particular IEC 62955 / IEC 62752, require the detection of a direct leakage current at 6mA DC to avoid the home residual current device (RCD) Type A being ineffective. This effect, called the blinding effect, appears when an EV develops an insulation fault.

EV architecture integrates a battery pack, powered by direct current (DC), which can generate a leakage current that can deactivate a home RCD. To protect the RCD and avoid the need to install an RCD type B in the electrical panel of home EV owners, EV chargers include a device to detect the DC leakage current. This detection is the role of the CDSR.

The CDSR provides analogue communication output and a serial peripheral interface (SPI), enabling simple interfacing of hardware. The CDSR operates from a +3.3V DC supply and has a typical current consumption of just 50mA when measuring 150mA as a maximum primary residual current.

The ratio-metric behaviour of the CDSR ensures it can resist power supply drift and maintain a stable output measurement.

The CDSR is robust, says LEM and can operate inside all EV chargers. Operating temperature range is between -40 to +85 degrees C. It can also withstand acceleration forces up to 10G while maintaining nominal performance. THE CDSR also has a high level of insulation between its primary and measurement circuits, thanks to long creepage and clearance distances (13.2mm).

A default detection output signal has a reaction time below 200 microseconds. Combined with an independent test winding, charger manufacturers can test the performance of the sensor in real time to guarantee maximum safety, assures LEM.

LEM believes that the CDSR provides an essential component of electrification, making the charging infrastructure more affordable, safer, and reliable. It was developed by the LEM Geneva R&D team.