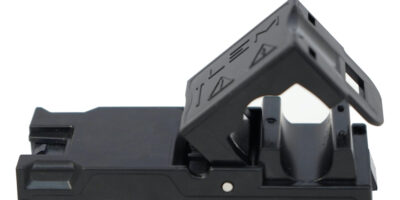 From LEM comes the latest current transducer series for retrofitting trackside applications or for reducing the cost of new installations. Its robust design and standardised 4-20 mA out means it can also be used in automation or the control of PV-plants. The transducer’s primary circuit (patent pending), in combination with two ASiCs to detect the magnetic field, aids precise current measurement.

The HTRS-series will be available in three current ranges (10 A / 30 A / 50 A), with peak current measurement up to twice that of nominal. Despite the high insulation test voltage of 6.0 kV, the HTRS-series is compact, measuring 72 mm x 29 mm x 26 mm. The HTRS series also offers good temperature stability, while mounting adapters allow the unit to be installed in existing applications.

The transducer complies with the International Railway Industry Standards (IRIS). With the HTRS, users in the field of railway technology have a versatile series of sensors at their disposal, regardless of whether they work in the field of rail or signalling technology. The HTRS series is suitable for measuring currents in point machines, crossing gates and signalling systems. It can also be used in industrial applications, such as process automation or DC current collection in solar parks.

A split core design offers a high overall accuracy of 2 per cent at +25 degrees C and high temperature stability in the operating temperature range between -40 and +85 degrees C. The HTRS has a measuring frequency bandwidth ( -3 dB point) of 1 kHz and also offers a fast response time of 10 micro-s at 90 per cent of the rated current. The current consumption at maximum primary current is less than 50 mA at a supply voltage of +12 VDC or +24 VDC.

Thanks to the primary circuit the maximum deviation caused by neighbouring conductors with the same current is only around 0.3 per cent (typical). The positioning error of the primary conductor is negligibly small compared with previous solutions.

Weighing 35 g, the transducer is more than 70 per cent lighter than previous split core current transducers for such applications. Other performance features include compliance with various internationally recognised railway standards as well as IRIS specifications.