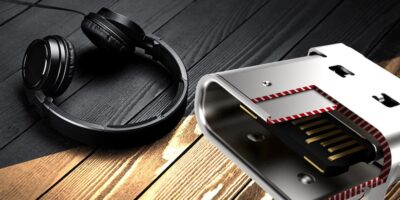 As the headphone market moves from micro USB to Type-C, connector companies have adapted to provide connectors to charge and transmit audio data. For purists, the near-lossless sound quality of a wired connection is a fundamental part of the USB connection selection, says GCT.

The characteristics of USB Type-C connections include a reversible interface for easier mating and a higher power and data throughput compared with micro USB translate well into headphone design. GCT says that a specific feature on the USB4055 Type-C connector helped a premium audio and headphone manufacturer.

the manufacturer wanted to replace a Type-C connector selected at the design stage for one of its flagship products. There were problems due to the configuration of the PCB and the EMI caused by the Type-C connector and the PCB was densely populated but the Type C connector initially chosen could not provide the required performance. A comparable connector was needed – to keep design changes to a minimum. A long body, single shell horizontal mount Type-C connector was used in the original design, which helped the connector protrude off the end of the PCB and lay flush with the headphone housing.

From GCT’s USB-C range of top- and mid-mount, short and long body options, the USB4055 was selected for the replacement.

It has an inner shell layer formed from a single drawn piece of stainless steel, which provides it with superior EMI shielding properties, claims GCT, as well as providing additional connector strength and integrity.

The USB4055 was temperature tested, to ensure it can safely offer power delivery standard at 5W. This test confirms rapid charge capability without a significant rise in the connector shell temperature.

GCT (Global Connector Technology) was established in 1988 and manufactures standard and custom interconnect and cable assembly products for markets as diverse as industrial, consumer and medical.

GCT has facilities in Europe, USA and Asia. Production facilities are located in China, supported by a dedicated engineering team in Hong Kong.