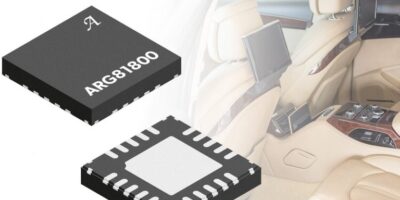 The ARG81800 has low Iq current for “keep-alive” applications. EMC is reduced by incorporating spread spectrum frequency modulation (dithering) to a non-dithered external sync clock and the provision of a dithered clock output to be used for other converters in the system.

“The ARG81800 is at the forefront of technology,” explains Mark Gaboriault, marketing director at Allegro. “The features that we have added solve real-world challenges for our customers.”

As electrical content in cars continues to increase, so does the continuous draw of keep-alive systems on the battery. Components must be able to pass the “airport test”, i.e. drawing as little current as possible so that the battery can still start the car after an extended period (such as a holiday). Similarly, battery-operated industrial systems must limit battery drain to extend service period.

The ARG81800 DC/DC regulator draws just eight microA, from VIN while regulating 3.3V or 5.0Vout at no load. In comparison to the typical 100 microA budgeted for automotive battery-powered subsystems, the low Iq ARG81800 frees up significant overhead to be allocated to other current draws that may occur in the system.

The low EMI means the ARG81800 is designed to make it easier to pass EMC testing first time around.

The ARG81800 is capable of wide switching frequency up to 2.4MHz to avoid critical “keep out” zones (e.g. the AM band), as well as frequency dithering and slew rate control to minimise switching noise. It also offers unique dithering-on-sync CLKOUT, which can be used for other switching converters in the system.