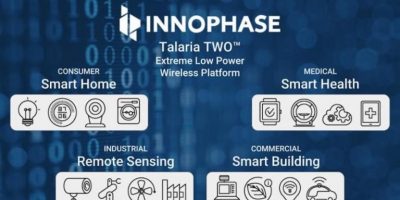 The Talaria TWO chip is designed for battery-based IoT applications and is claimed to be optimised to be the lowest power Wi-Fi solution in the industry. It has the potential to create a whole new class of IoT products that can cut the power cord and be battery-based with a DTIM3 specification at least half that of leading low-power wi-fi solutions, predicts InnoPhase.