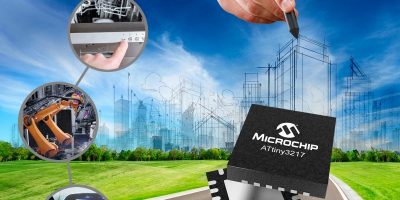 Two devices have been added to the tinyAVR MCU series by Microchip Technology. The ATtiny3217 and ATtiny3216 have the largest memory variants in the family and are designed for reliable operation in harsh environments.

The AVR MCUs create highly responsive sensor nodes because of their cost-effectiveness and ease of implementation, maintains the company. The ATtiny3217 and ATtiny3216 enhance the capability and responsiveness of responsiveness of sensor applications, including capacitive touch interfaces, with two ADCs that enable systems to implement touch control simultaneously with other analogue measurements. One ADC can be used with the peripheral touch controller (PTC) for touch signal acquisition, while the second ADC monitors inputs such as thermistors and pressure sensors. Alternatively, both ADCs can be used for faster sampling of different types of sensors, says Microchip.

Additional benefits are an improved real-time performance and accuracy. The dual ADC can be used for synchronous sampling of analogue signals, such as voltage and current to improve overall system real-time performance and accuracy. Additionally, the devices feature a hardware-based event system that enables inter-peripheral communication without CPU involvement, reducing latency.

To improve noise immunity and functionality in extreme environments, the tinyAVR MCUs operate at up to 5.0V and are available in 125 degree C variants.