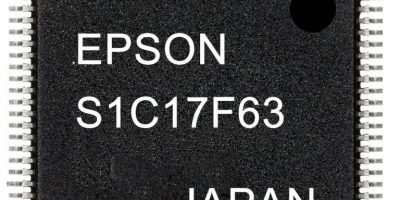 The S1C17F63 microcontroller, developed by Seiko Epson, is a 16-bit microcontroller that has a built in driver for smart cards with displays and other applications using small e-paper screens.

Samples are shipping now and Epson has announced plans to produce 500,000 S1C17F63 microcontrollers each month to meet the expanding e-paper market. E-paper displays are flexible and do power is required to keep data on the screen. They are used in a multitude of applications from e-books and signage to electronic shelf labels and smart cards. In smart cards, one-time password cards and dynamic CVV/CVC (Visa’s card verification value/Mastercard’s card verification code) cards with security codes that regularly change are seen as a means to provide stronger protection against phishing attacks on online banking accounts. Epson believes, however, that there are problems that need to be addressed with current embedded-display cards, which are susceptible to electronic component damage if bent or subjected to other physical stresses and which have limited battery capacity due to the limitations of the card configuration.

To solve these problems, Epson has developed a single-chip microcontroller with built-in driver circuitry engineered specifically for e-paper displays. Since there is no need for external drivers, the component count and chip size are reduced, due to built-in peripheral circuits. This is also claimed to increase card durability. Epson also reports reduced current consumption in real-time clock operation mode to 120nA (typical), a 40 per cent reduction compared to its earlier, comparable microcontroller, the S1C17F57. The low power draw makes it possible to extend the battery life of the product without increasing battery capacity, adds the company. The extra current can be used to rewrite a display screen, making it possible to shorten the interval between security code updates, enhancing protection.

In addition to the display driver circuit, the microcontroller offers flash memory, EEPROM, timers, an ADC and a temperature sensor. The built-in temperature sensor can be used to compensate display quality effects arising from the temperature characteristics of e-paper displays. The sensor can also be used together with a theoretical regulation function to compensate for temperature-induced frequency drift in crystals. Updating passwords requires synchronisation between a card terminal and system server, so accurate time measurements that are not affected by the ambient environment increase the security system value of customers.