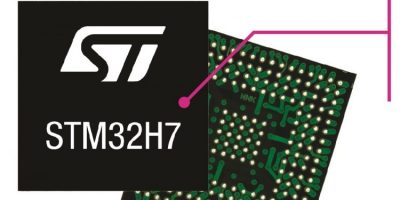 ST’s Chrom-ART Accelerator boosts graphics performance, while each core operates in its own power domain and can be turned off individually when not needed, to maximise power efficiency.

Developers can upgrade existing applications using the two cores, for example, adding a sophisticated user interface to a motor drive, formerly hosted on a single-core Cortex-M4, by migrating legacy code to the STM32H7 Cortex-M4 with the new graphics user interface (GUI) running on the Cortex-M7. Another example is to boost application performance by offloading intensive workloads such as neural networks, checksums, DSP filtering, or audio codecs.

The dual-core architecture also helps simplify code development and accelerate time to market in projects where user-interface code may be developed separately from real-time control or communication features.

The STM32H7 microcontrollers have up to 2Mbyte flash and 1Mbyte SRAM on-chip to simplify the design of smart objects in industrial, consumer, and medical applications with real-time performance or artificial intelligence (AI) processing requirements. The Cortex-M7 level 1 cache and parallel and serial memory interfaces offer unlimited and fast access to external memory, adds ST.

The microcontrollers are also characterised by error code correction (ECC) for all flash and RAM to increase safety, multiple advanced 16-bit ADCs, external ambient-temperature range up to 125 degrees C allowing use in severe environments, an Ethernet controller and multiple FD-CAN controllers and ST’s high-resolution timer for generating precision waveforms.