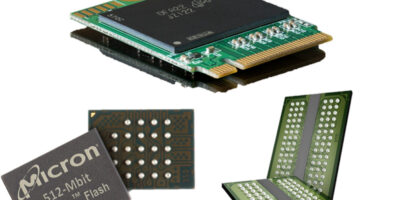 An international distribution agreement between Farnell, an Avnet company, and Micron Technology, brings the latter’s memory and storage products to the distributor’s portfolio.

Farnell says that adding Micron to its line card of semiconductors strengthens its offerings and gives customers access to memory devices to support disruptive technologies such as artificial intelligence (AI) and 5G.

Micron’s devices are suitable for many markets, such as consumer, mobile communications, automotive, industrial design and data centres, as well as personal computing, networking and server applications.

The portfolio also offers automotive-grade LPDDR4, which offers high speed, reliability and temperature support demanded by industrial, automotive and consumer applications. The MT53D512M32D2DS-053 AIT:D is a 16Gbit mobile, low-power DDR4 SDRAM device with a high-speed CMOS that can be internally configured, making it particularly suitable for extreme conditions.

Also available as a result of the distribution agreement are serial NOR flash memory, such as the MT25QU128ABA1EW9-0SIT. This provides a combination of features, including high-density, fast data throughputs, secure data storage, architectural flexibility and long-term product support.

Another highlight is the 2100AI PCIe NVMe NAND flash solid state devices (SSDs) which provide increased performance and reliability in extreme conditions, says Micron. The SSDs are suitable for industrial applications that require mass storage in a tiny footprint. The 2100AI SSDs, including the MTFDHBK128TDP-1AT12AIYY, use a single chip controller with a PCIe Gen3 interface connecting up to four PCIe lanes to Micron’s 3D TLC NAND flash memory. The SSD is designed to efficiently use the PCIe interface during reads and writes while delivering bandwidth-focused, low latency performance. SSD technology enables enhanced boot and application load times and reduced power consumption.

Micron is the fourth largest semiconductor manufacturer in the world, with a broad portfolio of high-performance memory and storage technologies, including DRAM, NAND, 3D XPoint memory, and NOR.