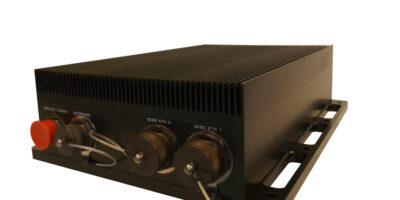 Two extended bandwidth daughterboard slots are included in the design of the RX310-X03 enclosure by Pixus Technologies. The company has announced an implementation of the ruggedised enclosure using NI’s Ettus Research brand software defined radio (SDR).

The RX310-X03 enclosure is designed to MIL-STD-810 for shock, vibration, environmental and MIL-STD-461 for EMI levels.  It features MIL 38999 connectors for the front and rear I/O interfaces.  The conduction-cooled enclosure is weatherproof, and protected to IP67.

The RX310 series can be used in airborne, ship-board and ground vehicles, or in outdoor designs. For example, said Pixus, they can be used in signal-integrity (Sig-Int), passive radar, smart agriculture, smart energy, and prototyping systems for advanced wireless (WiFi/Cell/MIMO) applications. The company also offers pole-mount and other special mounting options.

Pixus offers other ruggedised SDRs from NI, including its B, N, and E-series models. Light-rugged versions of the enclosures are also available upon request and the company is able to supply specialty configurations.

Pixus Technologies is able to leverage over 25 years of expertise in standard products, from a team comprised of industry experts in electronics packaging. The company was founded in 2009 by senior management from Kaparel Corporation, a Rittal company. Pixus Technologies’ embedded backplanes and systems are focused primarily on  ATCA, OpenVPX, MicroTCA, and custom designs. It also has an extensive offering of VME-based and cPCI-based solutions.

In May 2011, Pixus Technologies became the sole authorised North and South American supplier of the electronic packaging products previously offered by Kaparel Corporation and Rittal.