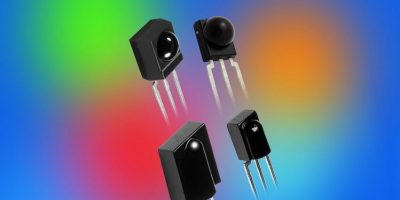 The receivers are designed for IR remote control in televisions, set-top boxes, audio systems, air conditioners, video projectors, cameras and video game systems. For the remote control function in these products, the devices provide increased robustness against disturbances such as IR emissions from CFL lamps and RF emissions from on-board Wi-Fi antennae. In addition, the modules’ improved pulse-width accuracy allows lower bit error rates for almost any code, and the devices are insensitive to supply voltage variations and ripple noise.

Each family is available with carrier frequencies from 30 to 56kHz and six automatic gain control (AGC) versions for short and long burst codes. All receivers feature a supply voltage from 2.5 to 5.5V and low supply current.

They are RoHS-compliant, halogen-free, and Vishay Green.

Samples and production quantities of the IR receiver modules are available now, with lead times of four to six weeks.

Vishay Intertechnology is one of the world’s largest manufacturers of discrete semiconductors (diodes, MOSFETs, and IR optoelectronics) and passive electronic components (resistors, inductors, and capacitors). The company’s components are used in virtually all types of electronic devices and equipment, in the industrial, computing, automotive, consumer, telecommunications, military, aerospace, power supplies, and medical markets.