Modular embedded computer is based on 3U-VPX technology 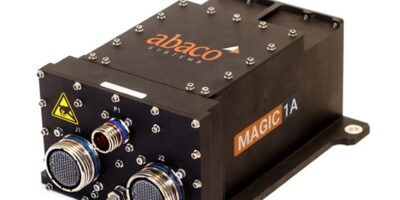 Adopting a modular, scalable approach to system design and architecture, the MAGIC1A is a high performance embedded computer (HPEC) from Abaco Systems.

Based on 3U-VPX technology, the MAGIC1A delivers the latest in graphics and computer processing in a rugged SWaP-C3 display computer. According to Abaco Systems, this ensures seamless integration. The small form factor provides processing and graphics capabilities for rugged computing for both industrial and military customers.

The MAGIC1A can be used as an upgrade to the MAGIC1, with an increase in power supply capability, an enhanced removable hard drive, and a more modular approach to system design allowing for upgrades over time. The MAFIC1A also provides increased CPU and GPU performance, with the Intel Xeon E3-1505M v6 (Quad Core) which operates at 3GHz base frequency. It also has up to 4.0GHz Turbo Boost, and the Nvidia Pascal Quadro P2000 GPU with 768 cores, 4Gbytes of GDDR5 memory and CUDA support, capable of delivering up to 2.3 TeraFLOPS of floating point performance.

The MAGIC1A is assembled and integrated from the factory, then delivered to the customer ready for their software application to be installed. Its upgrades ultimately remove costly development and integration schedules, claims Abaco, while delivering fully functional hardware. This allows customers more time to focus on software and intellectual property (IP). It also avoids the risk of system obsolescence.

Abaco Systems operates in open architecture computing and electronic systems for aerospace, defence and industrial applications. It creates modular products based on open standards that are characterised by rugged reliability and minimal SWaP.