MOSFETs in PowerPAK have best in class RDS on, says Vishay 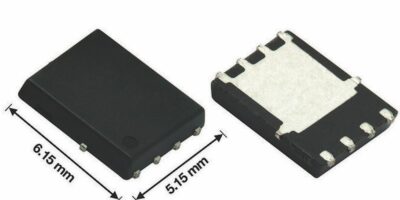 Believed to be the first -30V P-channel power MOSFETs to offer on-resistance of 1.7mOhm at 10V, the SiRA99DP has the lowest on-resistance, says Vishay Siliconix.

The low on-resistance represents a reduction of 43 per cent compared to the next best product on the market, says Vishay. The device reduces voltage drops and minimises conduction power losses to enable higher power density. The low RDS(on) is combined with a low gate charge of 84 nC, for best in class gate charge times on-resistance. This is a critical figure of merit (FOM) for MOSFETs used in switching applications, of 185mOhm*nC, adds Vishay.

The Vishay Siliconix TrenchFET Gen IV SiRA99DP is packaged in a 6.15 x 5.15mm thermally enhanced PowerPAK SO-8 single package. It is suitable for circuits with a 12V input, advises the company and is optimised for adapter, battery and general purpose power switches, reverse polarity battery protection, OR-ing functionality and motor drive control in telecomms equipment, servers, and industrial PCs and robots.

The increased power density saves PCB space in these applications by reducing the number of components needed in parallel, i.e. delivering more current per individual device. In addition, as a p-channel MOSFET, the SiRA99DP does not require a charge pump to provide the positive gate bias needed by its n-channel counterparts.

The MOSFET is 100 per cent RG- and UIS-tested, RoHS-compliant and halogen-free.

Samples and production quantities of the SiRA99DP are available now, with lead times of 12 weeks, subject to market conditions.