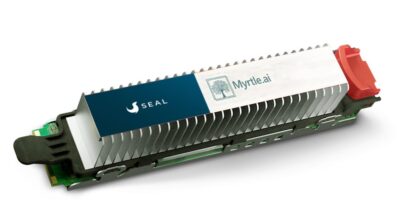 Claimed to be the industry’s most efficient accelerator for recommendation models, SEAL could save hyperscale and tier one data centre companies hundreds of millions of dollars every year, says Mrytle.ai.

Deep learning-based recommendation models are one of the most common data centre workloads, typically used for search, news feeds, adverts and personalised content. Recommendation models contain a mix of dense and sparse features, which leads to complex memory access challenges for the majority of the time (up to 80 per cent), says the machine learning specialist. Throughput is constrained by memory bandwidth in a typical compute infrastructure, which means that expensive compute resources are highly under-utilised, says Mrytle.ai.

It has announced SEAL which accelerates the memory-bound inference operations in recommendation models. This delivers large gains in latency-bounded throughput within existing infrastructure, enabling data centre companies to scale rapidly and halve the infrastructure cost of their peak traffic capability.

Energy consumption, which is a significant challenge, can be reduced by more than half, adds Mrytle.

SEAL is available initially in the Open Compute Project M.2 accelerator module form factor, intended for use in Glacier Point carrier cards. In this format, it delivers up to 384Gbyte of DDR4 memory per carrier.

The company has revealed that it is also reviewing alternative form factors.