Navitas cranks up the power with gallium nitride 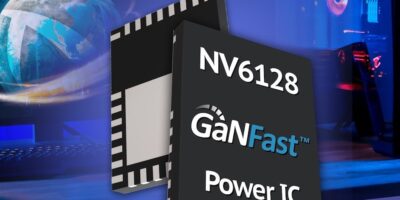 To deal with the needs of the high-power mobile and consumer power electronics market, Navitas Semiconductor has introduced the NV6128, a high-power 650V/800V-rated GaNFast power IC. The 70-mOhm NV6128 is claimed to represent a 66 per cent increase in current capability and comes in a small, 6 x 8 mm PQFN package with a proprietary, integrated cooling pad for high-efficiency, high-density power systems.

The NV6128 is rated at 650V for nominal operation plus a high, 800V peak capability for robust operation during transient events. As a true power IC, the GaN gate is fully protected and the whole device rated at an electrostatic discharge specification of 2kV.

Gallium nitride (GaN) is a next-generation semiconductor technology that Navitas says runs up to 20 times faster than “old, slow” silicon and enables up to three times more power or three times faster charging in half the size and weight. GaNFast power ICs integrate GaN power and drive plus protection and control.

“It’s a night and day comparison,” said Dan Kinzer, Navitas chief operating officer, chief technology officer and co-founder. “Compared to current tier-1 OEM laptop adapters using old silicon in traditional diode rectification and boost PFC topologies at 50-70kHz, the GaNFast NV6128 enables a modern high-speed totem-pole architecture and complete 300W solutions at over 1.1W/cc. That’s up to three times smaller and lighter with existing 200kHz control. When you crank up the speed to MHz+, you get another major step-increase in power density.”

“GaNFast power ICs have been broadly adopted by tier-1 names like Lenovo, Dell, Oppo and Xiaomi for fast-charging mobile adapters up to 200W, with over 13,000,000 shipped and zero failures,” noted Gene Sheridan, Navitas CEO and co-founder. “With the higher-power NV6128, we extended the effective power range to 500W for the consumer market and look beyond that to multi-kW data centre, eMobility and new energy applications.”