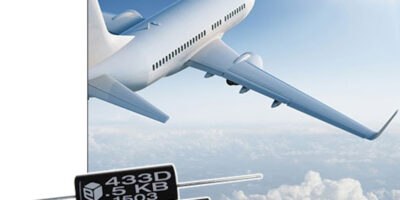 Both Electrocube capacitors are designed and optimised for high temperature applications subject to AC and pulsing signals. The rugged, non-inductively wound film and foil capacitors have a high temperature outer wrap and an epoxy endfill which meets or exceeds flammability requirements of UL94V0. The capacitors are manufactured with proprietary processes in the US and offer high frequency operation, high current and stability in miniature package. They are able to handle high surge currents without degrading, confirmed New Yorker Electronics. The 433D series can operate in extremely high temperature applications such as avionics, wind generation, high power applications, underground exploration and turbines.

Both the 433D and 436D series are designed with an extended electrode construction and standard tin-coated, oxygen-free solid copper leads. Most units are available in both RoHS and non-RoHS versions. The 433D is built with tolerances of ± five,10 and ±15 per cent. Tolerances for the 463D series are ± five, ±10 and ±20 per cent.

The capacitors operate at frequencies up to 100kHz and have a temperature range of -55 to +150 degrees C without derating. The film capacitors are proven to withstand 150 per cent of DC rated voltage (for a period not exceeding one minute at temperature of 25 degrees C) and possess a current limited to 5mA. They will withstand 140% of the DC-rated voltage at 150 degrees C for 250 hours with not more than one failure in 12 permitted. The dissipation factor will not exceed 0.1 per cent at 25 degrees C and the dielectric absorption will not exceed 0.02 per cent at 25 degrees C as per MIL-C-19978.

Protective clear wrap is offered on all wrap and fill units. Customisable insulating sleeves, mountings, special terminals, non-standard leads, circuit connections and other hardware are also available. New Yorker Electronics offers assorted styles, ratings and customisation for unusual requirements, including units with a higher IR or lower DF. Additionally, dimensional variations for all manufactured values that are available with the same volume.