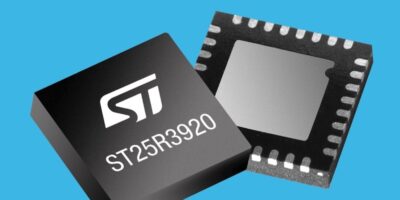 The Car Connectivity Consortium (CCC) Digital Key Release 2.0, relaying on NFC, offers the ability to use the key while the phone battery is so low that normal device operation is disabled.

With DPO, the device operates at up to 1.6W continuous RF output power and 2.5W short-term input peak, to maintain reliable NFC connections over distance with a small antenna. ST’s NSR technology increases immunity to interference from noise sources to simplify EMI and is also claimed to ease certification. Automatic antenna tuning compensates for changes in the RF environment to maintain the best possible connection to the user’s smartphone, while low-power key-signal detection with inductive wakeup minimises load on the battery when the key is not being used.

The ST25R3920 has been designed for space-constrained locations that severely limit the maximum antenna size, as a result in can be positioned in door handles, B-pillar, or centre console.

The ST25R3920 supports the CCC Digital Key Standardization Release 2.0, the architecture endorsed by the world’s leading carmakers, smartphone manufacturers, and electronics suppliers. ST is a CCC member and plays a key role in setting NFC standards as a member of the NFC Forum board, various working groups, and ISO 14443 and ISO 15693 task forces.

The IC is also certified by NFC Forum and can work as an NFC reader or NFC universal device. Compliance with NFC Forum standards for pairing applications, as well as EMVCo 3.0 standards, allows its use as an in-car contactless-payment terminal for services such as electric-vehicle charging. In addition, a Qi wireless charging NFC-card protection algorithm enables safe wireless charging of portable devices.