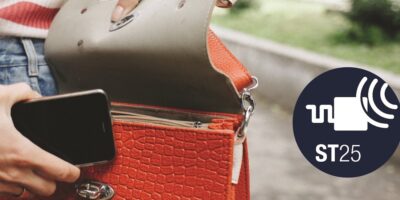 Dynamic message content and anti-tamper characteristics are included in the ST25TV512C and ST25TV02KC NFC Type 5 tags, introduced by STMicroelectronics.

The ISO/IEC 15693-compliant NFC Type-5 tags respond both to smartphones and 13.56MHz long-range RFID readers. They allow native exchange of NDEF messages without a mobile app. Augmented NDEF allows dynamically updated information, such as tamper status or a personalised URL to be added to NDEF messages, for security and marketing alerts. Up to six attributes can be configured to append to the message including a unique tap code (UTC). The dynamic messages can be accessed by tapping the tag.

The ST25TV02KC-T variant has tamper detection, which can be used to verify the integrity of assets using Augmented NDEF communication. All devices have protection services, which include a 64-bit encrypted password with a failed-attempt counter for data safety. In addition, TruST25 digital-signature services verify die authenticity, and there are also untraceable and kill modes to protect user privacy.

To simplify antenna design, the tags have the same chip capacitance as the previous product generation. They operate from -40 to +85 degrees C and integrate a configurable EEPROM with 60-year data retention. This, says ST, is the highest value available among major NFC suppliers.