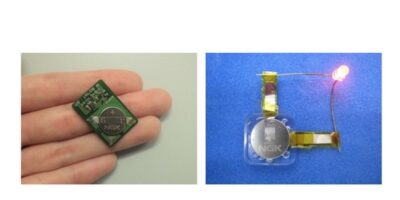 The company has raised the maximum operating temperature of its coin-type EnerCera Coin battery, part of its EnerCera series, to 105 degrees C. Sample shipments are underway, with mass production scheduled to begin in September 2020.

Last year, NGK developed the world’s first lithium-ion rechargeable battery with an operating temperature range of -40 to +85 degrees C. Today, it announces that improvements has resulted in the increased upper limit, while still maintaining capacity and power. In its fully charged state, when the battery is most prone to deterioration, capacity decrease is less than 20 per cent even after it is kept at 105 degrees C for 1,000 hours.

The EnerCera Coin battery’s structure includes a small amount of electrolyte added to the all-ceramic stacked monolithic body with electrodes and a separator. This provides high thermal stability. The EnerCera battery is categorised as semi-solid-state battery, with performance equivalent to, or better than that of, a conventional lithium-ion rechargeable battery. The EnerCera battery’s heat resistance characteristics are comparable to those of all-solid-state batteries, says NGK.

The battery can be mounted on a circuit board by reflow soldering, which is a common method for mounting electronic components on a board, or mounted through injection moulding, where molten resin up to 300 degrees C is poured into the mould and the battery is directly embedded into the resin structure.

Iwao Ohwada, NGK’s vice president, explained that the development of high heat resistance products was realised through feedback from partners in the automotive, industrial, logistics and smart card industries.

NGK claims to be the world’s largest manufacturer of electrical insulators and has developed products in the electronics and automotive sectors. The company celebrated its 100th anniversary in 2019. NGK manufactures large-capacity energy storage systems (NAS batteries), which have been installed in over 200 different locations worldwide.