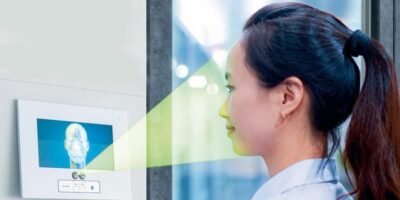 The CGSS130 enables battery-powered devices to run for longer between charges while supporting sophisticated sensor functions.

According to ams, the CGSS130 sensor is four times more sensitive to NIR wavelengths than other image sensors on the market today, and detects reflections from very low power IR emitters in 3D sensing systems. It is the IR emitter that consumes most of the power in face recognition and other 3D sensing applications, says ams, which means using the CGSS130 sensor will enable manufacturers to extend battery runtime in mobile devices.

The 1.3Mpixel sensor also creates the opportunity to implement face recognition in wearable devices and in other products which are powered by a very small battery, or to enable a new range of applications beyond face recognition as the increased sensitivity extends the measurement range for the same power budget.

The stacked BSI process used to fabricate the CGSS global shutter image sensors, results in a small footprint of 3.8 x 4.2mm. The sensor produces monochrome images with an effective pixel array of 1080 x 1280 at a maximum frame rate of 120 frames per second. The high frame rate and global shutter operation produce clean images free of blur or other motion artefacts, says ams.

The sensor also offers a high dynamic range (HDR) mode in which it achieves dynamic range of more than 100dB. It also implements advanced functions such as external triggering, windowing, and horizontal or vertical mirroring.

The CGSS130 is available for sampling.